A Tale of Two Kitties Abandoned by a “Humane” Society

All the neighbors with whom we have spoken here in Golden Valley did not know that Minnesota's Animal Humane Society (AHS) is releasing cats in all weathers to fend for themselves in our and other communities. This is their "Return to Field (where found) Community Cat Program." The AHS annual reports document 4,374 cats being “returned to field” from Oct 2014 to June 2019. They have no registered volunteers feeding these cats and advise against feeding. One neighbor recently saw one of two black cats kill a field mouse he heard screaming in the cat's mouth. Another neighbor said he has chased a small black cat away from his bird feeders because it was catching the birds.

During the month of June2018 we took two black cats who came on our property to the AHS. The first one, whom we later named Fanny, turned out to be one of their "Community" cats with the tip of her left ear cut for identification. Yet even close up that ear was not visibly different from the other ear. She had been out all winter of 2017-8. The AHS released her and she was back on our property 24 hours later.

Shy Fanny was very shy and adept climber and hunter

The second cat, whom we named Black Bean, was a young male and was back on our property 24 hours after being taken to the AHS where he was, like the other cat, neutered, had much more of his left ear cut off and was given a 1-year anti-rabies vaccination but not wormed or tested for feline leukemia and immunodeficiency disease. Parasites can mean that cats suffer and die from anemia and starvation while these viral diseases (and others for which there are vaccines available but are not given) could infect other cats.

This second cat was so sociable toward us, rubbing against our legs as we coaxed him with food and easily put him in a cat crate. Yet he was deemed unadoptable by the behavioral evaluation staff at the AHS who put his age at over 3 years rather than around 10 months. As a veterinarian with a doctoral degree in animal behavior and author of three books on cat care and behavior co-author Fox finds this utterly incomprehensible. This beautiful young cat was given no time to settle in to the shelter environment where he would naturally be fearful before coming to trust his care givers.

So, we took this cat, Black Bean, in to our home after appropriate veterinary tests for FLV and FIV (both negative) and treatment for internal parasites at the City Cat Clinic in St. Louis Park. After five months we found a forever home for him, thanks to Kim Cook’s BlueSky Rescue, with a family who took another cat, Zorro, whom we rescued and fostered a year earlier.

On Dec. 10th, 2018 we succeeded in catching the small female cat we named Fanny and after checking her out through the All Paws Animal Hospital in St. Louis Park that was willing to take in a cat who could have fleas and other issues. She is now in our home, surprisingly solicitous of attention with our rescued dog Kota, but compared to Black Bean will take some time before she initiates any physical contact with us.

Interestingly, after 3 days in a large holding cage in our home she would accept being petted and would purr. But once released into our living area she would hiss and avoid contact when we tried to pet her. A longer time in the cage might have made her less shy when released, the confinement brining on learned helplessness, the Stockholm syndrome. My wife and I considered this inhumane. But in an animal shelter situation, this would be most expedient given space and staff time to facilitate the recovery and rehoming of “feral” cats. 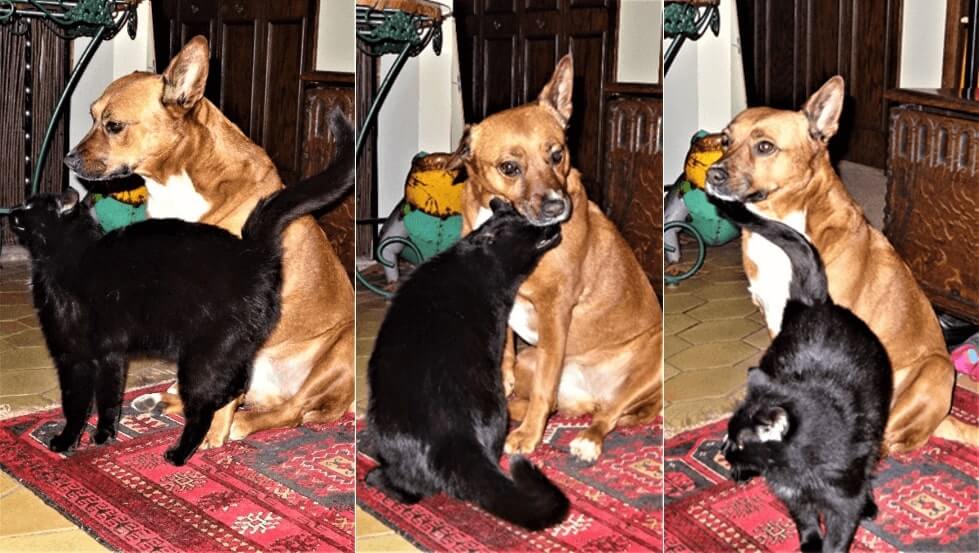 Black cats are considered the least adoptable by some rescue organizations because of superstitious beliefs that may go back to the European Black Death pandemic in the middle-ages when cats were blamed and destroyed in many communities .Even today, especially around Halloween, reports of black cats in particular being tortured and killed are all too common. But black cats matter

We have rescued and provided all needed veterinary care to make a dozen cats adoptable, keeping two ourselves, since living in this part of Golden Valley. One of our cats, Mr. Mark Twain, a tomcat who survived several Minnesota winters before we caught him, became a most devoted, empathic companion whom some would call a Bodhicatva.

We live close to Theodore Wirth Park and wildlife, now being made ever more environmentally problematic by the AHS. Their Community Cat Return to Field program, commonly called TNVR---trap, neuter, vaccinate and release, is because they lack housing space and chose not, therefore, to euthanize but rather, under the erroneous banner of “No Kill” shelters, release selected cats outdoors to fend for themselves. This is inhumane for many that do not survive and cannot be justified ethically as an alternative to a humane death when there are no contained cat colony refuge facilities with group housing as we have seen and worked with in Europe.

TNVR is not a legitimate way to reduce the overall cat population which advocates consistently claim. It is an unsubstantiated claim especially in open suburban and rural communities. It is endorsed by national organizations such as The Humane Society of the U.S. where the politics and economics of appeasing rather than opposing cat rescue organizations and animal shelters engaging in TNVR put the organization and others in an unconscionable and ethically untenable position. Our communications with Golden Valley’s Mayor, City Manager and Police Commander of Operations requesting who gave the AHS permission to engage in TNVR in our community provided no definitive answer as to who is responsible.

Furthermore, the AHS is in violation of MN Statute 84D.01, Subdivision 8 (1996) which "prohibits placement, release or to allow the escape of any non-native species in a free- living state" ("aka into the wild"). This would include any domestic or feral species that are non-indigenous/ non-native like the house cat, Felis domestica.

In October 2020 four 12-week old black kittens that were considered unadoptable and were to be released by the AHS under their Community Cat program were saved by Julie Marvets, operator of a cat sanctuary in Faribault MN when she was informed by one AHS staff member concerned about releasing such young animals to fend for themselves.

Free-roaming and homeless cats are a recognized public health threat and as predators, decimate wildlife, compete with natural, indigenous predator species and can spread diseases to them and to people’s indoor-outdoor cats.

Group-housing for the emotional recovery of rescued cats and working with all cities and communities to establish ordinances prohibiting people from allowing their cats to roam off their property; have humane educators in schools; provide materials on responsible cat care including neutering and microchipping, at all points of cat food and other-product market outlets reap some State tax dollars that could fund better alternatives to TNVR in response to what wildlife biologists and public health scientists call America’s cat plague.

Studies suggest black cats are less likely to be adopted, tend to remain in shelters longer, are perceived as less friendly and tend to evoke superstitions, but pet owners like Tracey Lenac, who runs Black Cat Holistic Rescue, know they can be just as sweet as any other cat. Fortunately, some cat lovers have made it their mission to advocate for black cats, which in other countries are thought to be symbols of luck, prosperity, protection and even the owner's ability to attract suitors. Full Story: Psychology Today (10/25),

The City of Saratoga Springs, Utah, conducted an analysis on "The Science of Feral Cats" to help it understand and effectively address feral cat issues in the community. The report was initiated after Best Friends Animal Society called on the City to implement a trap, neuter, release (TNR) program. This extensive report (100 pages) found that "overwhelmingly, science does not support TNR programs as an effective method to reduce feral cat populations" and that such programs "fail to adequately mitigate the significant threat to public health or alleviate the negative impacts on wildlife that feral and free-roaming cats pose."

For additional documentation on this issue visit www.drfoxonehealth.com